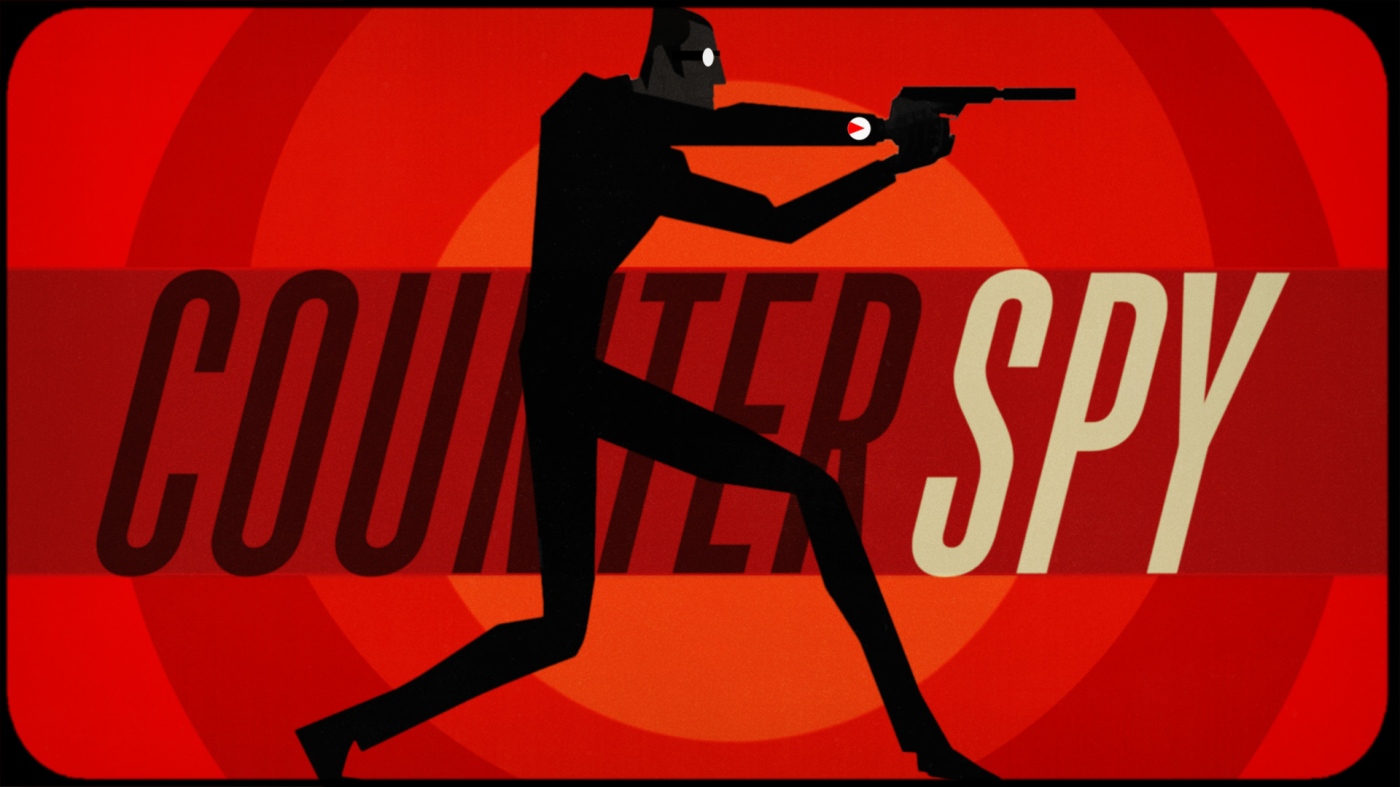 Aside from the obvious (that’ll be FREE games), one of the cool things about the whole PS+ games whatsit is that it can sometimes point you in the direction of titles you may have missed. I’d never heard of CounterSpy for example, so had it not been an offering this month, I’d almost certainly not have played it. Which would have been a real shame, because I really quite enjoyed it.

Set during the Cold War, you play as an agent working for a covert organisation tasked with preventing Mutually Assured Destruction from, like, happening and that. In the context of the game, this means infiltrating both US and Soviet bases to collect various pieces of Intel, all in an attempt to prevent some firing-nuclear-missiles-at-the-moon type shenanigans. It sounds daft, I know, but in fairness to CounterSpy, it’s all done in a fairly tongue-in-cheek way, and the game never takes itself too seriously.

In fact, CounterSpy is very much made with a knowing nod to The Man From U.N.C.L.E. type TV Shows, and the (earlier) James Bond films (particularly with its animations and music), and Dynamighty have positioned it somewhere between a loving homage and cheeky parody – and it works really well. It’s stylish, if simple, and actually reminded me at times of GoldenEye on the N64 – which is never a bad thing. I was mostly playing on the PS Vita, and it all looked and sounded pretty great on it. Which is a big bonus because the game really lends itself to the pick-up-and-play ethos of the Vita system. 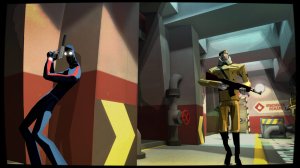 In terms of gameplay, CounterSpy is a 2.5D, mostly side scrolling shooter, with an emphasis (wherever possible) on stealth. The .5 bit refers to the various sections where you pop yourself behind cover, and things get a little bit more 3Dish. It’s mostly a nice touch, and elevates the gameplay (and difficulty) slightly. I did occasionally have a few issues when the game transitioned between side-scrolling and depth-based stuff, both with aiming and finding/locking to cover, but it was never really gamebreaking.

If you do fail in your stealthy-ness, and guards use the radio to alert everyone to your presence, the ‘defcon’ meter will rise, and when full, the defcon level will increase (or, more accurately, decrease, but you get the point), and if you get killed, it’ll automatically rise one full level. If you ever balls-up in a big way and things go full Defcon, you’ll have a minute to reach the computer terminal that ends the level, or, like, boom! If, on the other hand, you come across an officer during your espionage-y exploits, by making them surrender you can lower defcon by one full level, often giving yourself some much needed breathing room.

And, although your primary objective is always to find the aforementioned primary Intel, there are various bonuses hidden throughout the levels, including extra Intel (which will get you cash bonuses), dead agents carrying intel (again, cash), weapon blueprints (which, when they’re complete, can be bought at the start of levels) and formulas (which can also be purchased to upgrade or bolster character abilities). There are an admirable number of hidden pathways and rooms, so you’ll likely have fun looking for them all.

Which brings me to two of CounterSpy’s coolest features.

The first is how the game’s overall progression works. You have to find a certain amount of primary Intel to trigger the game’s final mission, but you can always choose whether to do a mission on the Soviet side, or the US side. It’s likely that each mission will have different characteristics, including the amount of primary Intel, number of blueprints, formulas, and officers present etc. That last one is important because your defcon level continues across missions on a particular side. So if, like me, you made a mess of a US mission early on, you’ll start the following US missions with whatever defcon level your ineptitude saddled you with, but if they have stuff you want (blueprints, formula, primary Intel), you might decide to risk it anyway. Or, if that level has a few officers present, you might play it in the hopes of finding them, and improving your defcon rating.

This is significant because the final level, once triggered, will be done on whatever side you have the worst defcon level on. That might mean (again, like me) that you have to forego the final mission for a bit (you have that option) to play particular missions solely to improve your defcon standings.

The second cool thing is that levels are randomly generated, meaning you can’t game the collectibles, and that each play-through will be a different experience. The first US mission will probably be different every time, for example, so there’ll be no memorising where an officer, or blueprint is hidden. And, given that blueprints and formulas stack across play-throughs, there’s oodles of replayability in CounterSpy. There are also bonuses to be had by beating other people’s scores (on certain levels), as well as bragging rights in relation to your overall score after a completed game. So, even though each play-through is relatively short, I found there was ample incentive to dive straight back in, and I don’t expect I’ll get bored with Counterspy for a while yet -particularly as there are quite a few cool weapons I’d really like to unlock.

And, in conclusion, that’s pretty much Counterspy in a nutshell. It’s a cool, simple, yet highly enjoyable little indie game which lends itself to repeated playing – either in one session, or playing the odd mission here and there when you find yourself with 20-or-so minutes to spare. Thanks to the relatively simple mechanics, stylish finish, and with the whole ‘random generation’ thing thrown in to boot, CounterSpy is elevated above the level of many mobile games, without sacrificing any of the elements that make them so popular. My only real complaint, aside from the previously mentioned cover thing, was that sometimes levels could take a while to load, but that’s mostly forgivable when you consider the whole ‘random generation’ thing.

Given it’s free, you don’t have much to lose by giving it a try, and there’s every chance that you’ll really like it if you do. CounterSpy also features a cross-buy/save option, so you can enjoy it across multiple platforms too, so, all things considered, it’ll probably make a nice little addition to your gaming collection.