To say that I’m ‘a bit excited’ about Virtual Reality would be akin to saying that Antarctica is ‘a bit cold’, or that Trevor Philips is ‘a bit strange’, because in all honesty, I’m already losing sleep at the prospect of diving into full-on VR type shenanigans. Imagine my joy then, when Sony yesterday announced that Morpheus is not only coming, but could be here as soon as “early 2016”.

On the one hand, that’s slightly later than I was hoping for, but on the other, it’s certainly not that far away. And, if you’re looking for further silver linings, Sony are using this time effectively, and the device shown at the GDC yesterday was already significantly better than the one shown last year – in terms of both design and functionality.

Of the former, a few tweaks now mean that the headset distributes its weight more evenly, and with the majority of it being placed on the top of the head, rather than the front of the face. Obviously, being able to play VR games without a cumulative ‘face-being-pulled-off effect’ is a welcome development, and one which, all things considered, I’m reasonably happy about. And, if keeping your face where it is isn’t such a big deal for you, the Morpheus now also features a “quick-flip” button, allowing the user to immediately remove the visor from their field of view. It’s a relatively minor detail, but an important one nonetheless, and should reduce incidences of walking into things/standing on the cat/falling down the stairs by a factor of about a bajillionty-million.

However, it’s the improvements in tech and power that are really exciting. The new and improved Morpheus is, in essence, twice as powerful as the one demoed last year, and now boasts an OLED display with a 1080p resolution, capable of generating images at a fairly impressive 120 FPS. And, in reducing-the-chances-of-vomming news, Shuhei Yoshida has claimed that the Morpheus will have a lag of just 18 milliseconds. That’s important because, according to boffin types, anything less than 20 milliseconds is pretty much indistinguishable from, like, real-life. Not only is that great for reducing the nausea potential, but also genuinely awesome in terms of quality and experience in general. 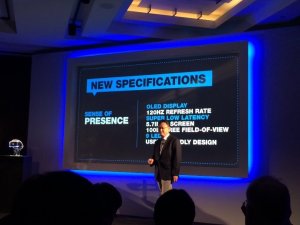 Finally, it seems there’s also good news on the games front too. As I said in my original piece, having games to play on the Morpheus (or any VR headset) is pretty important, obviously, and will go a long way towards preventing VR from being just a passing fad. The new and improved Morpheus unveiled yesterday also came with a fairly good selection of new game demos, which suggests the medium is being taken seriously by developers. Yoshida also claimed that the transition to VR will be as significant as that which saw games move from 2D to 3D, and suggested that these demos “are just the beginning”. In fact, in a fairly unambiguous commitment to the new tech, he also went on to say that Sony “will deliver a VR experience that pushes boundaries of play, and ignites a passion in players”.

To be honest, my passion doesn’t really need much more in the way of ignition, but, it’s undoubtedly a good thing that there’s a willingness to make this more than a niche, gimmicky addition to the gaming world. Given that there currently seems to be a bit of a tech-war in the VR field, with several companies vying for a share of the market, there’s every reason to expect some genuinely innovative and exciting developments over the coming months. And whilst I appreciate that not everyone is as excited by VR as I am, I think it’s fair to say that the coming of VR will be an extremely interesting period in the history and evolution of both games, and gaming.