Often, when trying to explain the appeal of games to a non-gamer, I fall back on the whole ‘it’s like an interactive movie’ chestnut. It’s a narrative that you get to join in with, influence, and thus ultimately experience on a deeper level than you can by just passively watching a film, I say, trying to sound deep. And you invest more in the story, and characters, precisely because you make decisions which can dramatically alter that very experience, I add, often to quizzical looks and a fair degree of incredulity.

It’s obviously not a foolproof analogy, but it holds up for the most part, and over the last few years, expanding budgets, all-star casts, and improvements in graphics, sound and storage capacity have led to some truly epic gaming narratives. 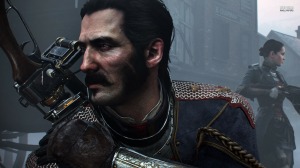 Indeed, to strengthen the point, back in the old days, games would shamelessly milk the movie tie-in market, whereas now, such is the quality of gaming, it’s Hollywood who are increasingly looking towards games for great ideas and narrative experiences (and, as we inexorably slide towards Resident Evil 145: Zombie Annihilation on Jupiter, it’s arguably the film industry who are now guilty of the ‘Tie-in milking’).

Anyways, seldom has the ‘Interactive Movie’ analogy been so obvious to me as during my playthrough of The Order: 1886. The stunning graphics, expertly created atmosphere, and lengthy cinematic cutscenes made it feel like I was an actor in a big budget, glossy Hollywood blockbuster, rather than plodding my way through a glitchy, graphically imperfect world of pixels and polygons.

That said, it also became apparent to me that, actually, it might not necessarily be such a good thing. Don’t get me wrong, the ‘cinematic’ elements of The Order are, for the most part, a welcome development graphically speaking, but at times I felt like my participation was a token gesture – like when I was a kid and I’d be allowed to join in a game only when everything had already been decided.

Accordingly, I began to question whether ‘Interactive Movie’ is a direction we want games to be heading in, and whether, if on balance it is, we should set a few ground rules now.

Let’s take the cutscenes, for example. In theory, the seamless blending between gameplay and cinematics is a good thing, for a variety of reasons, but it seemed to me that The Order may have got the balance wrong. It often felt like I couldn’t go more than a few metres without finding myself forced back into the role of passive spectator, and it got very, very frustrating at times. Massive sections of the game’s chapters were purely cinematic (sometimes even whole chapters), and instead of pulling me into the story, it mostly ended up with me wishing the story would just jog on, so’s I could actually do something.

(I’ve been having the disk eject problem with my PS4 recently, and at one point, I attempted to continue my game from a chapter with a huge cinematic at the beginning, and not being able to skip it, I’d watch for 5 minutes, only for my disk to eject just as it was coming to the end, and I’d have to repeat the process all over again. For an hour!). 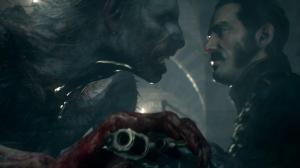 And then, of the periods of the game that weren’t purely cinematic and passive, a big chunk of what was left was the old Quick Time Event. And any fool knows that these are basically cinematics with a bit of a nod to the fact that there’s somebody else involved who probably wants to, like, join in and that, having spent 50 quid on a game they would like to, you know, actually play.

Sure, I understand that QTEs are a way of doing complicated scenes/fights/action without compromising the graphical (or narrative) integrity of the game, but again, there has to be a balance. If I just wanted to push particular buttons in a rigid, predetermined pattern, I’d get my “Simon” out of the back of the closet, but a) I don’t want to, and b) it’s not 1986.

And then, if that wasn’t enough, even when stuff wasn’t purely cinematic, and wasn’t using genuine QTEs, it wasn’t really what you could call free gameplay either.

This was most apparent when fighting the big boss type Lycans. It only happens twice (which is in itself a bit of an issue in a game where you’re part of an order involved in a centuries long struggle against werewolves), but both times you find yourself without a gun, the camera fixed over your shoulder, and with limited offensive and defensive options, both involving pressing a particular button in a very restricted manner.

The fights against the lesser half-breeds aren’t much better either – with how, and when you kill pretty much decided already. Fancy seeing what a particularly cool steampunk weapon does to a dying half-breed’s groin? Tough. Wondering whether it’s susceptible to a two-fingered death punch? Unlucky.

And this sort of thing happens throughout the game, and cinematics are given precedence over gameplay almost everywhere. So, because exploring the bowels of a mental hospital, or abandoned underground tunnels is waaaay more atmospheric when you’re holding a lantern, that’s what you’re bloody-well going to do. And if you’re set upon by a lot of guys with big guns, you’re going to keep holding that lantern, because you care more about ambiance than having your face shot off, apparently. Screaming ‘Put down the effing lantern and use a gun that’s not a pistol’ won’t help you, and neither will frantically pressing every button on the controller in the vain hope that there is a ‘put the sodding lantern down‘ option. You might be massively outgunned for no obvious reason, but hey, it sure is spooky and whatnot though, eh!?

It’s possible I’m being overly harsh, and in fairness, Ready at Dawn got a lot of stuff right too, and I did enjoy a lot of The Order, but I personally felt like it could’ve been a lot better, and that it was too much of an ‘Interactive Movie’ when I really wanted a game. To play.

In many ways, The Order: 1886 is a showcase for the power and potential of next-gen consoles, and a very good one in that respect, but for me, it came at the cost of the gameplay experience. There’s definitely a balance to be found between telling a story, and allowing the gamer to be involved in it, and regardless of how great graphics are going to get, I think it’s important developers always remember that.

Polished, cinematic games are great and all, but they’re still games first and foremost, and the reason we’ve thrown money at them (and not at, say, a film) is because we want to be an integral part of the narrative – not a passive bystander being force fed eye-candy, however impressive it might be. I couldn’t help but feel like The Order: 1886 was a film that I’d sort of, by accident, got invited to be involved in, when what I really, really wanted to do was dive into the gloriously detailed and exquisitely imagined London of Werewolves, Vampires and Steampunk gadgetry.

And that was a shame, because it really was an awesome looking world!