Because of the regional restrictions on Xbox 360 games, I tend to binge buy mine once or twice a year. A couple of years ago, it just so happened that the night before one of these splurges, I was talking to my best friend, who mentioned that one of his colleagues had become, and I quote, “unhealthily obsessed” with the Fallout games, and had all but withdrawn from the real world in favour of spending every available minute in a post-apocalyptic, virtual one.

Roughly twelve hours later, standing in a well-known game store, I noticed that Fallout 3 was on sale for £10. Now, rather than paying heed to what a more sensible person might consider a cautionary tale, or stark warning even, and wilfully choosing to ignore the unhealthily  bit of “unhealthily obsessed”, I thought instead, ‘Sweeeet, I’ll have me some of that…….’ and the rest, as they say, is history.

But when I say “history”, I, of course, mean all-encompassing, total and mostly unrelenting addiction. It’s still a bit blurry, to be honest, but to cut a long story short, I eventually re-emerged from the world of Fallout 3 about 8 months after I’d entered it, having logged something in the region of 250+ playing hours. And during those 8 months, even when I wasn’t physically playing Fallout 3, I was mentally playing it. I dreamed its map, its locations, and, if there was a bit I was struggling with, my subconscious would, somewhat helpfully, spend the night strategising on my behalf, so I’d wake with a brainwave ready to put into practice, and the Xbox would be turned on again even before my coffee machine had had time to finish brewing. Non-essential elements of my real-life (like, say, personal hygiene) were constantly being pushed down my to-do list in favour of grabbing any precious time I could finding an elusive bobblehead, or raiding a nest of Deathclaws to find whatever booty they might be protecting. 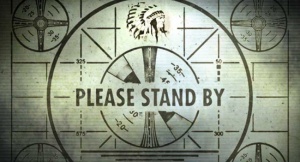 And then, get this, afterwards, when I re-emerged, blinking and confused into the real world, I didn’t embrace my newly re-found freedom, or return to life’s rich tapestry as one might imagine: I genuinely missed the world of Fallout 3, I was homesick for it. As luck would have it though, my leaving that world pretty much coincided with another trip to the UK, and I got Fallout: New Vegas (GOTY edition) and started the process all over again.

Now, after the best part of two years spent in the Fallout World, everything in the real world has changed because of it. Many times my enjoyment of another game, regardless of how brilliant it is, has been lessened because at some point, I’ve thought “Nice try guys, but Fallout did that better!”, and even in day-to-day life, I’ve found myself mentally engaging (but not using, obviously) my V.A.T.S combat system when somebody has pissed me off. In other words, I’ve developed a definite case of ‘Why can’t all games be like Fallout?’, but also, a terminal case of “Why can’t everything be like Fallout?”

So, you may very well ask, what’s so damn special about Fallout? It’s a fair question, but the simple answer is: Everything.

Still not convinced? Well, let me go into details.

Firstly, the Fallout World is huuuuuuge. The term ‘Sandbox’ gets thrown around a lot these days, but in Fallout’s case it’s a term that is not only literally true (post apocalyptic desert and all that), but that, I would happily argue, makes other supposedly “sandbox” games look like limited, side scrolling NES games in comparison. Even the commendably massive Assassins Creed: Black Flag can seem decidedly limited next to the valleys, vaults, caves and mutant-infected subway tunnels of Fallout. It really is giganormous (so big, in fact, I just made up a word to describe it!), and it would be fairly common for me to lose the best part of a weekend just exploring one location that I’d come close enough to for it to show up on my map. I was addicted to finding every bottlecap (in-game currency), every person to talk to, every weapon to strip down for parts, every computer to hack. 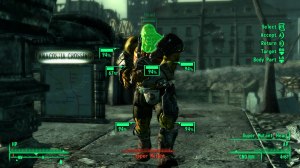 Then there’s the aforementioned V.A.T.S combat system. Various games have come up with various ways to shoot people, from regular first-person cross-hairs in the middle of the screen, to the sticky aim assist of your COD or GTA type games, but I personally think Fallout’s Vault-Tec Assisted Targeting System is one of the very best (I’ve lost count of the number of times I’ve accidentally thrown a grenade in other games because I’d tried to bring up a non-existent VATS). You do have the option to use the regular FPS mechanics, but, brilliantly, by tapping on the VATS button, you can stop time (In your face, The Matrix), and highlight different parts of your enemy to focus fire on. When you do so, the chances of actually hitting that part are shown, along with the amount of damage it’ll do, as well as the number of Action Points this’ll cost you. Set upon by a group of enemies, but don’t have enough points to finish them all off? Shoot them all in the legs with VATS, then finish them off in regular mode. Or, alternatively, take out the guy with the big gun first, then get the guys with crappier weapons with significantly less chance of getting your head blown off. Basically, it makes every combat encounter a strategic engagement, where thinking about it can pay huge dividends.

And even being in a position to use a particular gun in the first place requires an element of forethought you rarely get in other games. Given your character can only carry x amount of stuff, and given your weapons weigh different amounts, and degrade with use, do you carry a few different weapons, and switch between them when they jam, or do you carry only your best weapon, and a spare to use for repairs, even though they’re heavier, and the excess weight might mean you can’t carry back some cool gear, or goodies when you find them? There’s a similar set of calculations that need to be done for the armour you’re wearing, too. Do I go with the big, heavy-duty stuff that weighs more, or the lighter stuff that leaves me exposed if I’m set upon by a hostile faction? Many a time, I’d spend an hour in front of my wardrobe or filing cabinet making just these kinds of decisions, playing around with different combinations until I thought I’d got the balance just right.

Then, related, but equally brilliant in its own right, there’s the XP, perks and S.P.E.C.I.A.L. character development system, which is as close to perfection in Fallout as anything I’ve yet come across. Here you can add Action Points, make the chances of getting a critical headshot greater, choose to unlock every location on the map, make your character stronger (thus able to carry more stuff), more Charismatic (thus unlocking more conversation options), more Science-y (hack more terminals), in a virtually unlimited set of combinations.
I’ve never claimed to be “cool”, but I’m pretty sure the time I leveled up, and unsure of how to best utilise my points, perks and whatnot, especially in combination which each other, opened up an excel spreadsheet to help, was the furthest I’ve ever been from it. Here’s the thing though, I didn’t even care. Such were the rewards for getting it just right, I considered it a price worth paying. 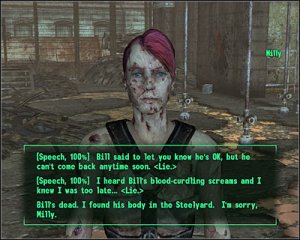 Then there is the story, missions and karma aspects of the game, which are, I suspect, so well thought out that I’d wager no two people have ever had the exact same experience playing the game. For example, I found the karma aspect of Infamous: Second Son both obvious and disappointing, and largely because it’s nowhere near as complex and intriguing as that contained in Fallout. There were times when I genuinely agonised over the course of action I should take, or the response I should give to a question, request, or interaction. My hard drive is still testament to this, featuring lots of saves that would, like a virtual Ariadne’s Thread, allow me to go back to a particular branch of my story arc, and make a different decision, should the one I’d chosen turn out to be wrong, or had resulted in the death of a character I’d genuinely come to care about. Hardly anything is black and white, indeed there are more shades of grey than a certain set of erotic novels: Do I side with the “bad” faction I dislike because the thing they want me to do is “good”? Do I do a bad thing for the “good” guy because it might be the difference between him living or dying, even though it’s going to mess up my own karma?

These are the types of questions that Fallout will make you really grapple with. It might sound like hard work, and it is in a way, but once you’re immersed in the world, it’s almost impossible not to care about these things. And after all, isn’t it precisely this kind of interactive element that makes us choose to play a video game, over say, watching a film, where all the decisions are made without us?

As you can imagine, it’s this sort of thing that also gives the Fallout games a massive amount of replayability. Again, if you contrast it to InFamous: Second Son, where you’ve basically got a “good” and a “bad” play-through, in Fallout, one decision made differently at one specific point may unlock story or interaction options that will only unlock based on that one decision. I’m rubbish at maths, but that seems like a lot of options, right there!

And at one point, I am going to go back and play it all again (or, at least I will when I find out where my girlfriend’s hidden it). But here’s the really weird thing: I’m genuinely torn between wanting to throw myself back into that world, see what happens next time etc, and not wanting to diminish the first experience, which was, to my mind, perfect. 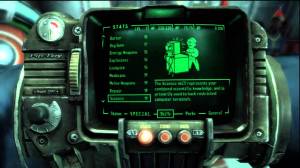 It’s not often a game can have that effect on you, and it’s just one of the many reasons I love it. I maybe wouldn’t recommend it, per se (mainly because I don’t want to be sued for any resulting divorce, loss of gainful employment, etc, etc) but what I will do is say that, without a shadow of a doubt, Fallout 3 and Fallout: New Vegas were everything that I think a really great game should be.

It’s not for everyone, obviously, but I’ve since found out that it does have a loyal and dedicated set of fans, who like me, are desperate for another installment of the franchise. Information about when that will be is decidedly thin on the ground, and separating hard facts from rumour can be pretty hard. What I am sure about though, is that if a new game does come out anytime soon, particularly if it utilises all the power and potential of the new-gen consoles, I, and a lot of other people, may well be MIA for quite some time……