As a young ‘un, I spent many a happy hour shooting Nazis in the face on Wolfenstein 3D, and I vividly remember passing entire weekends in front of my friend’s Amiga as we took it in turns to fight our way out of basement after basement of the Third Reich’s mega prison complex (whilst one of us did the shooting, the other would be strategically positioned near the door listening for approaching adults, thus allowing us to leap into ‘doing our homework’ position before getting rumbled). I also recall that, at the time, I was pretty much convinced that Wolfenstein 3D represented the pinnacle of not only gaming, but technology and science-y stuff in general, and that, as a species, we’d, like, totally peaked in terms of entertainment and whatnot. 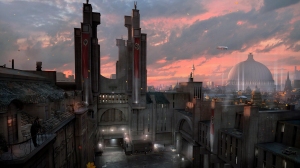 Obviously, with hindsight, that assumption was hilariously naïve (to be fair, I was 12), however, it’s also fair to say that, in many ways, the further advancements that did occur afterwards (at least in gaming) did so, at least in part, because of Wolfenstein (and Doom etc). Indeed, take pretty much any 1st person shooter now, with all its bells and whistles, and you can draw a line directly back to them, via other classics along the way. So COD > Medal of Honour > GoldenEye > DOOM > Wolfenstein 3D, for example, and even though the exact route may vary depending on your own favourites, it will almost certainly end, every time, at Wolfenstein (or at least one of its contemporaries) where the genre essentially began.

Anyway, that’s a fairly long-winded way of explaining why, when I put Wolfenstein: The New Order into my PS4, I was, in equal measure, both ridiculously excited and genuinely apprehensive. This was a game that held a special place in my own gaming history (and one in everybody’s gaming history even if they didn’t necessarily know it), but returning to it after so long, and after so much had happened in gaming in the intervening years, could easily prove to be disappointing. To be sure, this was an entirely different game, but there was still the very real risk that it could, if it was shite, retrospectively taint a franchise that is considered a classic. I’ve seen enough crappy remakes of things that defined my childhood to know that, sometimes, some things are just best left alone, and as I pressed X, I prayed to all known Gods that this didn’t turn out to be one of them…….

Imagine my relief, therefore, when W:TNO turned out not only to be not shite, but actually pretty damn good. The folks at MachineGames (Developer) and Bethesda (Publisher) have managed to walk the very fine line between history and the present with skill and aplomb, and accordingly, this game managed to please both my retro-gaming self, and my modern-gaming self too. A lot.

What that means in practice is that Wolfenstein has enough knowing nods in the direction of the original to keep the former happy, and also enough innovation and evolution to entertain the latter. To be clear, this isn’t a retro game, and in terms of graphics, mechanics, weapons etc. it’s much closer to a modern COD than it is to the original Wolfenstein, but in many ways, it does have a kind of simplicity that you don’t find in First-Person -Shooters anymore. Don’t get me wrong, it doesn’t look bad, or feel particularly old-fashioned, but it does have a minimalism that both reminds you of earlier games, and creates an atmosphere of oppression and futility. There are no lush jungles, or richly textured environments, for example, but instead acres and acres of Super-Concrete and Steel, which in my opinion, only adds to the alternate history narrative, where the Nazis have come to dominate the entire globe. There are “excursions” to different environments (including, quite enjoyably, being “on the Motherfucking Moon” for a bit), but even in these, the focus is very much the mission; doing what you have to get done, rather than stopping to check out the scenery, or update your instagram page. 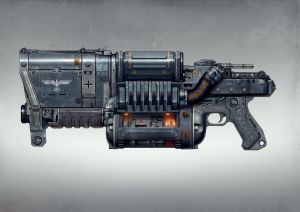 This is also true of weapons and gadgetry too, and W: TNO uses both sparingly, which again works well in both the context of the narrative, and in the context of a retro/modern gaming experience. You have access to some pretty standard weapons at first (which you can switch between at any time, unlike, say, COD, where it’s primary and secondary only – although, be warned, using the weapon wheel under fire can be a bit tricky), but as you progress through the story (which involves discovering various bits of Nazi tech within the context of the whole alternative history thing), this arsenal gets a bit more impressive and futuristic. At no point, however, did I ever feel I was being forced to use something for the sake of it, or because the developers wanted to showcase some cool toy or whatnot: in other words, no random drone section, or suddenly gaining control of super-space laser for shits and giggles. There are a few exceptions, most notably the LaserkraftWerk, and the “Spindly Torque”, but even they feature in a very tongue-in-cheek way, adding to the fun without necessarily detracting from the tone.

And on that note, I genuinely thought that both the tone and narrative arcs were exceptionally well done in Wolfenstein: The New Order, and I found myself really enjoying, and investing in, the story. Just gleefully blasting Nazis would have been enough to sustain most gamers’ interest, for sure, and conversely, too much story getting in the way of said blasting would have been frustrating, but again, I think the game walks that middle-line very, very well. I find alternative history things interesting anyway, so I might be a bit biased, but I became quite immersed in it all with relative ease. There are plenty of laugh-out-loud moments which show the game doesn’t necessarily take itself too seriously, but also some genuine moments of tragedy and despair too. Blazkowicz, and particularly in his doomed relationship with Anya, provides plenty of moments of real pathos and emotion, and (without wanting to give too much away) a decision made early on in the game has quite emotive consequences further down the line (in both “stories”), making you really appreciate the futility and thanklessness of his existence.

In the same way, the game also allows you to flesh out the alternate world as much, or as little, as you’d like with the various newspaper articles dotted around, the recordings you unlock, or the letters you can find, and there are within these, equal amounts of humour and tragedy too. This is a world where good people do bad things, or vice versa, and lives intersect in weird ways, and hope and despair alternate as the dominating force.

For me, this all culminates brilliantly in the last level, and last scenes, and whilst I might not have been sobbing like a baby, when the end credits and song came onto the screen, I actually caught myself sighing and slumping back on the couch as though I’d finally reached the end of a long and exhausting ordeal. It wasn’t a happy ending, certainly, and even though I knew it was coming, it felt about as “right” as it did inevitable and finally accepting the characters’ fate was a liberation of sorts, and certainly more satisfying than a Hollywood type ending – which would have felt equally wrong and contrived.

Ironically, this also made me want to immediately go back and start it all over again, as if knowing how it ended made me want to savour the stuff that led there even more. It’s here that Wolfenstein’s re-playability elements take centre stage. As I’ve already mentioned, there are two story arcs, and whilst they don’t make a massive amount of difference to the overall experience, they do instigate small, subtle differences at various points, and are well worth experiencing (not least for the LSD trip with a dude who may, or may not be Jimi Hendrix). There are also the various collectibles, including the enigma codes, which allow you to have a crack at unlocking yet more game modes when you’ve found them all (initially working out how to crack them is fiendishly difficult, btw). There’s also an upgrade/perks system, which is worth keeping an eye on, and given it’s unlikely you’ll complete them all in one play through, this has you wanting to go back and tackle a level you previously blasted your way through, but using only knives and stealth instead. Also, I won’t spoil things for you, but if you do have fond memories of the original Wolfenstein, or even if you missed it the first time around, there’s a particularly cool little Easter Egg that had me (at least) giggling with a bizarre combination of pure excitement and genuine nostalgia.

All-in-all, Wolfenstein: The New Order was a thoroughly enjoyable experience. If you have no emotional investment in the franchise, it is possible that you may just see it as a poor man’s version of today’s First Person Shooters I guess, but I genuinely think the story more than compensates for whatever Wolfenstein lacks in gadgets and gimmicks. Indeed, one of the things I loved about it was that it eschews a lot of that kind of stuff, precisely so that you can focus on what matters: namely, shooting Nazis in the face. It’s basically you against the entire Third Reich, motivated by a sense of justice and the need for revenge, and ably assisted by the ability to dual-wield some mofo-ing big guns. And, to be honest, that’s a pretty good premise on which to hang a FPS shooter. Throw in the fact that you’re up against some pretty evil f*ckers who you positively want to shoot in the face, for the good of all of humanity and suchlike, and you’re left with a very satisfying, and ultimately really quite morally rewarding way of passing the time.

It must have been tempting to approach a re-vamp of a classic by just throwing loads of modern gizmos and whatnot at it, but MachineGames admirably resisted that urge, instead choosing to use the developments in gaming to flesh out the characters and story within a much-loved classic. At the same time, they also managed to update it enough to make it fresh and exciting, whilst remaining true to the original tone and all the stuff that made us love it in the first place.

So, all things considered, they did a really, really good job!