OK, so right off the bat I feel I should probably declare that I’m not what you could reasonably call a massive Halo fan. And by that I mean that, even though I have played (and mostly enjoyed) the games, I’m not a huge follower of the franchise, and the ongoing story/themes/characters aren’t things I’ve paid a huge amount of attention to, or spent a lot of time thinking about. I played through the games quickly (and almost certainly in the wrong order), had my fun, and then moved on. I’ve recently acquired the Master Chief Collection, and am looking forward to perhaps changing all of this, but for now – and for the purposes of this review – you should definitely bear in mind that I’m coming at it from something of a n00b’s point-of-view.

That said though, with the combination of the #HuntTheTruth intrigue, this being the first true next-gen iteration of Xbox’s signature franchise, *and* having had me a brief go on Halo 5: Guardians prior to release, I was pretty excited about jumping back into the Halo Universe, and was hoping it would suck me in and, ultimately, make a fanboy out of me. Did it? Well, let’s take a look…..

The first thing that’s immediately obvious about Guardians is that, GRAPHICALLY speaking it’s genuinely amazing. Like, really, really good. The Cinematics and Cutscenes are quite possibly the very best I’ve ever seen, and I spent a lot of time watching them in slack-jawed astonishment. From the outset, Halo 5 establishes itself as a visual tour-de-force, and maintains a firm, unrelenting grip on your eyeballs until the very last. To illustrate that point, I usually start to get a bit annoyed with extended cutscenes and such – especially when I’m pressed for time – but I actually looked forward to the ones in Guardians, and I almost felt a little disappointed when they were over and I had to, like, actually do stuff. Obviously games set in space, and featuring spaceships and imaginary planets and whatnot have something of an advantage over games that feature real-world places – in that nobody’s gonna call them out on an imaginary planet or spaceship not looking like an imaginary planet or spaceship, if you see what I mean – but still, I was pretty damn impressed with it all. 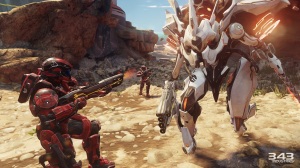 In-game graphics aren’t quite on a par with the Cutscenes and Cinematics, but they’re reasonably good in their own right. There isn’t a huge amount of variety in terms of environments, scenery and locations, but the stuff that’s there is all fairly well rendered and easy enough on the eye (rocks, mostly. Shitloads of rocks!). Perhaps more importantly, it all runs exceptionally smoothly, and I noticed no juddering, freezing, or frame-rate issues whatsoever. All that under-the-hood jazz is near perfect, and there’s a silkiness and polish to how the game runs that’s great to see – and play. The Audio’s truly epic too – and there’s all the usual Halo Operatic Bombast, and when the Score, Audio Engineering, Visuals and Mechanics are all working together in perfect harmony, Halo 5 is a truly impressive thing to experience.

In terms of GAMEPLAY and NARRATIVE type stuff though, I honestly felt that Guardians was considerably less impressive. Or epic. Or even particularly original. Throughout the fifteen missions there’s almost no variety to speak of, both in what you have to do, or who you have to kill – with the only real difference being a slight increase in the number of enemies, or waves, as you progress towards the end. Whether you’re covering the Master Chief stuff, or Locke pursuing him, it’s basically the same five or six enemy types scattered about amongst some rocks. Shitloads and shitloads of rocks. There are a few levels where you have to mix it up ever so slightly (usually using vehicles/fantabulous flying machines and suchlike), and there are a few encounters with End-of-level/Bullet Sponge type baddies, but I never really felt like I was doing anything other than what I’d already been doing. A lot.

I know First Person Shooters are generally like this – but even so, most of them have now figured out that you sometimes have to mix it up a bit – lest shit become boring – but not here. Even a Stealthey-type level would’ve been a welcome diversion – or maybe something requiring a wee bit of lateral thinking to go along with all the shooting – but nope, nothing. I appreciate that, on the flip-side most people buy FPS games precisely for the FPS stuff, so there’s an argument throwing in other stuff is counter-productive and/or not cool, but I think Guardians would really have benefited from something else.

Now, let’s look at this Narrative stuff. When I first saw the reveal of all of this #HuntTheTruth kerfuffle, I was actually quite intrigued, and I even said in a piece I wrote that I expected the internet to be abuzz with ‘at least as many batshit-crazy theories as back when Lost was on the Telly’. Why do I mention this now? Well, because in terms of Expectation/Build-Up vs Pay-Off, this is up there with Lost. And I don’t mean that in a good way, obviously. Going back to the whole ‘me being something of a n00b’ thing, I fully admit that this might mean I missed some of the nuances, or exposition, or on-going lore, or whatever, but honestly, I was a little disappointed. I’m not saying I was expecting David Lynch-esque intrigue, but I was hoping for something a little more, you know, interesting.

I’m not going to spoil anything for you, but the only thing that’s more obvious than the rocks in Halo 5: Guardians – is the bloody story. Moreover, I think it would’ve been disappointing anyway, but – and call me old-fashioned here – if you’re going to spend the best part of six months teasing and tantalising some big reveal, you’d better be damn sure it pays off. Again, if you are a big Halo fan (or a Geologist), and particularly if you’ve spent time with other offerings in the on-going Halo Universe (including the non-gamey stuff), there’s a chance that this’ll sit better with you than it did me, but I couldn’t help but be just a tad underwhelmed.

All-in-all, and in CONCLUSION, that was my take-away from Halo 5: Guardians. I felt like it delivered on some levels, and I enjoyed most of it, but I just felt it didn’t quite deliver on as many levels as it could’ve. Or we were led to believe it would’ve. Or that, given the wait for it, it should’ve. Yes, there’s a lot to like about the game, and a lot that’s done really, really well – but whilst it sets new benchmarks in some areas, it seemed to really disappoint in others. That all averages out to a resounding ‘meh!’ overall, which has to be considered something of a shame – given this being a Halo, the first on Next-Gen, and us waiting the best part of two years for it arrive on Next-Gen, etc, etc.

However, as any fool knows, the Campaign is only a small part of what makes Halo, Halo – and the multiplayer stuff is at least as big a reason for its popularity. Therefore, it’s almost unfair to rate Halo 5 solely on the campaign/SP stuff, without factoring in all the pew-pew, shooty-shooty online stuff, right!? That’s where I’m heading right now, and – afternoon of expletives hurled at the TV/me being hopelessly, hideously bad aside – I’m very much looking forward to it. Depending on how it goes, I hope to be able to report back soon-ish, so keep an eye out for that – and for me being able to judge Halo 5: Guardians in its entirety.