A Few Thoughts on The Uncharteds, and a Look Ahead to Uncharted 4: A Thief’s End 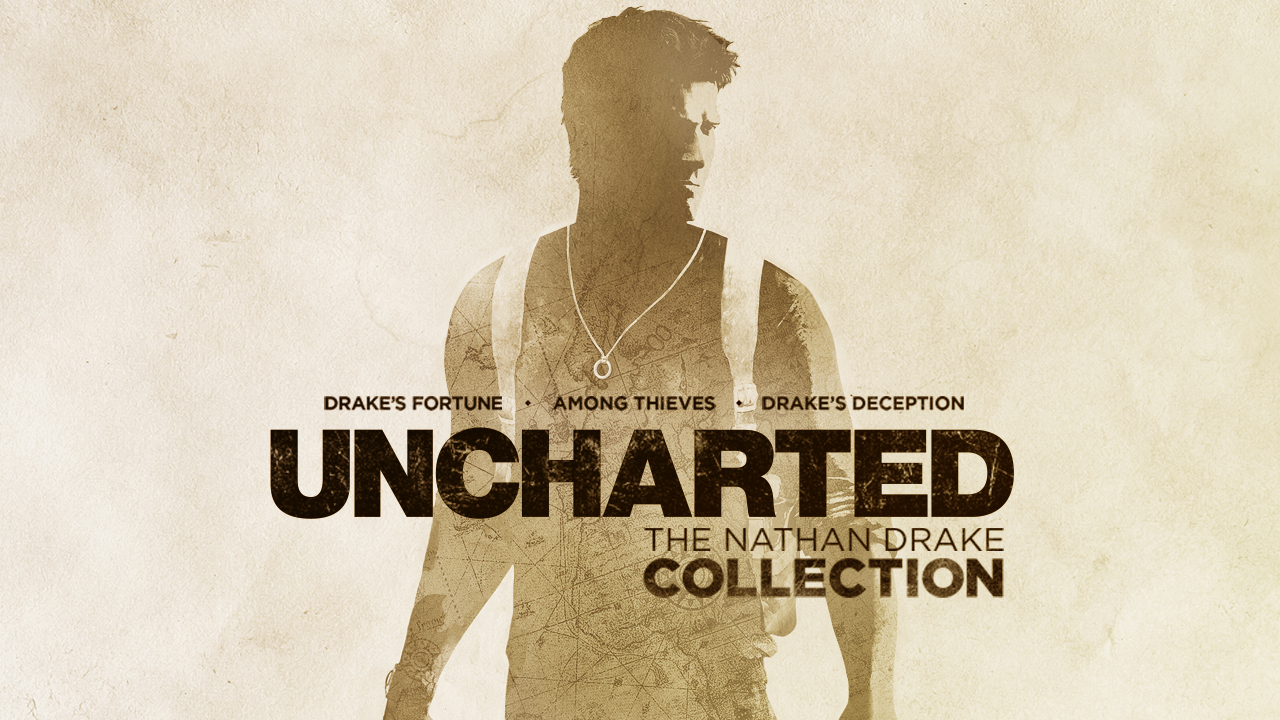 Over the course of a fortnight, I’ve collected 260+ treasures, shot a zillion dudes in the face, shimmied along countless ledges, made approximately 748 wisecracks, and all whilst cunningly disguised as a fella by the name of Nathan Drake. Over the same period, I’ve discovered some exquisite locations, gotten into some ill-advised fisticuffs with a tank, shot some more dudes in the face, and seen some shit that’d make the guy with the big hair from Ancient Aliens be all like, “C’mon now guys, that’s a bit too far-fetched”.

I am, of course, referring to Uncharted: The Nathan Drake Collection – the remastered Trilogy of Naughty Dog’s uberpopular series, positively packed with gaming goodness, and currently (re)whetting millions of appetites for the eagerly anticipated release of Uncharted 4: A Thief’s End. Indeed, with only a couple of months to go before it’s due to land (touchwood), the timing of my three-game jaunt was no accident, and it was done with specific recap/refresh type intentions ahead of the next installment, which I’m just a wee bit excited about. In that spirit, I thought I’d take the liberty of making a few observations about the three games I’ve just played, and use them as a clumsily fashioned springboard to leap into some general chatter about, and predictions for, Uncharted 4.

As per the commonly accepted rules of netiquette, and because I’ll be covering the three games in some detail, consider this your **SPOILER ALERT**!

Seriously, what have we ever done to the folks over at Naughty Dog? Sure, the British Villain cliché is so common now (Deadpool even made a joke about it in the opening credits), but to have at least one British antagonist in all the games of a Trilogy just seems a tad excessive, right!? I mean, I lived in the UK for close to 30 years, and I can honestly say that not once did I ever meet a super-villain, and on exactly no occasions did I come across anybody plotting any kind of global domination. I might’ve just been moving in the wrong circles, admittedly, but I can’t help but feel a little cheated having never come across what is, apparently, our country’s biggest export. If Uncharted 4 continues on the series’ current trajectory, I’ll be disappointed with anything less than some Aristocratic chap wearing a monocle, living in a hollowed out Volcano, and stroking a Persian cat (and, no, that’s not a euphemism).

Nathan and Elena are, generally speaking, a fairly believable couple, and over the course of the three main games in the series, plenty of meat is added to those bones (again, not a euphemism – or at least not a sex one anyway). What is a fairly simple ‘love interest’ type trope in the first game is subsequently added to in the following two (main) games, until the relationship between the two is a deeper, complex, more complicated one. In quite a clever little twist on the part of Naughty Dog, a few people may’ve even found themselves remarking upon Drake’s fickle nature at the start of the second game – and by extension, the game makers’ too – only to have that exact thing turned into a (fairly successful) part of the narrative tension a few chapters later. Likewise, in the third game, this was built upon again, and there will have undoubtedly been people guessing when and how Elena would eventually pop up, and what impact it would have on our protagonist. When she did show up, there was a fairly significant chunk of revelation thrown into the mix, which in turn set up the final, into the sunset-type scenes of the game. In terms of a prediction, quite where Uncharted 4 will go with this dynamic is anybody’s guess really, but if it is genuinely to be the last Uncharted game, I’d tentatively guess that there might be an incentive for Nathan to walk away from treasure hunting shenanigans in the form of a newly found sense of parental responsibility.

Death (and the Father Figure)

On that note, I suspect many of you will have responded to that last sentence with a kind of ‘Awww, poor naive James! Nathan’s not going to walk away from any shenanigans on account of being very, very dead!’. Whilst I’m not necessarily ruling that eventuality out – particularly while it seems to be the t’internet’s prediction de jour (and thanks in part to some definite hintage from Neil Druckmann) – I have a slightly different hunch in that regard, and one that, actually, I’d find more affecting than Drake getting dead.

If there is to be a “Thief’s End”, and if it is an end in a more permanent sense than just a ‘walking away from that life’ kind of one, my money would be on Sully. And it’d be on Victor Sullivan for two main reasons. Firstly, the dynamic between Drake and Sully is a consistent – and consistently brilliant – one in the Uncharted games, and in Uncharted 3, it’s actually a significant part of the game, and given plenty of attention in the back-story bits. There’s also an element of Master/Pupil in the dynamic, and playing the games in quick succession, I definitely felt a distinct sense of ‘passing on the torch/getting too old to be helping you out’ steadily increasing as the cumulative narrative wore on.

Sully’s been an important part of Drake’s story, at times pushing him to move forwards, at others pulling him back, but he’s always been an essential crutch for Nathan, and an important source of wisdom and experience. Losing Sully would be devastating for Drake, but it would also be the thing that would force him to accept certain truths he’s been so far unwilling to acknowledge. And what’s more (and the second main reason for my hunch) is that we already – briefly – got a taste of exactly that devastation. Sure, it turned out to be an ephemeral devastation brought about by Drake ‘tripping balls’, but I’d be surprised if there wasn’t a degree of attention being paid to our reactions over at Naughty Dog HQ. Of course, I could be spectacularly wrong about this (especially given I’m wrong about 94.3% of the time – and because they also “killed” Sully in the first game too, although it was considerably less effective then), but, hey….. Who knows, eh!?

Nathan Drake, aka Bart Simpson and the cupcake

There’s that oft-cited quote from Einstein about how the definition of insanity is doing the same thing over and over again whilst expecting different results, but personally, I think of it as Bart Simpson and the cupcake now. Anyways, what’s that got to do with Nathan Drake I hear you ask? Well, everything. Don’t get me wrong, I loved the Uncharted games, and I love playing as Nathan Drake, but holy shitballs does he have short-term memory/experiential learning issues! Three times Drake sets out in search of the big score, on the treasure hunt to end all treasure hunts, amid some pretty intense competition from some decidedly dodgy characters (who like tea and crumpets, obviously) who’d likely list their occupations on LinkedIn as some variation of bringing about armageddon and/or achieving dominion over, like, the whole world.

However, on each of those occasions it takes Drake until close to the penultimate chapter to go, ‘hang on a minute…. maybe they’re after some weird, dangerous, supernatural shit here, and not, say, an actual treasure…. ‘ and on three occasions, he’s been a bit gutted that he’s spent a fortune chasing said treasure, only to have to destroy it and walk away empty handed.

That’s forgivable the first time – I mean, we’ve all made that mistake at some point – but to still be all like ‘Ooooh, I wonder what this treasure might be, I can’t wait to spend my money…’ two thirds of the way through the third game strikes me as being a bit daft! I get that it’s a narrative device, and I get that there needs to be an element of mystery, but seriously Nathan, as a rule of thumb, if you’re ever attacked by any kind of supernatural/biologically unlikely entity, you’re probably not going to be walking away with any treasure. Learn it. Revise it. You’ll be tested on it next week. And more importantly, please don’t do it again in Uncharted 4 – you’re better, and smarter than that.

Finally, let’s take a quick look at some of the little dangling tidbits from the series that have, so far, yet to be wrapped up adequately. Most obviously, there’s still the unanswered questions about Nathan Drake and (again, just to refresh…. **SPOILER ALERT**) whether he’s even Nathan Drake in the first place. That last bit was hinted at in the 3rd game, but was just kind of left there, sitting in the sun like a big old ‘fuck you’ to anybody expecting – or hoping for – any kind of elucidation or resolution. It would be a significant revelation given the whole ‘Francis Drake’s descendent’ whatsit, but it wouldn’t necessarily be too interesting in and of itself, given “Drake” could still be “Drake” without being Drake – if you get what I mean?

Similarly, even though we got a bit of Drake/Sully back-story in Uncharted 3, we’re still (as far as I can remember) largely unaware of Drake’s own history before that. Some of it was hinted at, but often that brought up more questions than answers. Why’s a 13 year old kid wandering around on his own in South America (and who was on duty at the immigration desk the day he arrived)? What happened to his parents? Why the fascination with Francis Drake if he’s not a descendent, and how and when did he discover it all if he is? Again, that was briefly covered before (‘Drake may not have had kids with his English wife…’, or words to that effect), but again, it was never entirely elaborated on, and what was revealed was brought into question by the whole ‘that might not be his real name’ thingumyjig later.

Elsewhere, I’d like to see some decent resolution to Chloe‘s shizzle. She’s a great character, I think, but she’s sort of relegated to the level of plot device and/or frequently abandoned without satisfactory reasons. She just sort of fucked off out of the story in Uncharted 3 and that was both jarring, and a shame because she’s pretty cool. I guess in some respects I’d like a decent bit of ‘getting the old gang back together’ in A Thief’s End, even if it’s not necessarily the most original of devices, because that would at least allow them to give Chloe a fitting send-off.

And, last but not least – and more of a hope than a prediction – is that I really want Uncharted 4 to be a brilliant end to such a well-crafted, funny, and ultimately extremely enjoyable series. I have every confidence in the Uncharted team, and I have no specific reasons to doubt them, but there is an inherent pressure there – both thanks to the popularity of the previous games, and the delays to this one. In many ways, I understand (and agree with) the decision to wrap The Uncharted Universe up whilst it’s still great, but a part of that legacy will undoubtedly depend on exactly how they do that – and they could achieve the opposite of their intended results if they end the series on a bum note; in effect retrospectively tainting the franchise. Obviously (even if they were reading this) it’d waaaay be too late for them to do anything now – but honestly guys, pleeeeeease don’t balls this up.

6 thoughts on “A Few Thoughts on The Uncharteds, and a Look Ahead to Uncharted 4: A Thief’s End”