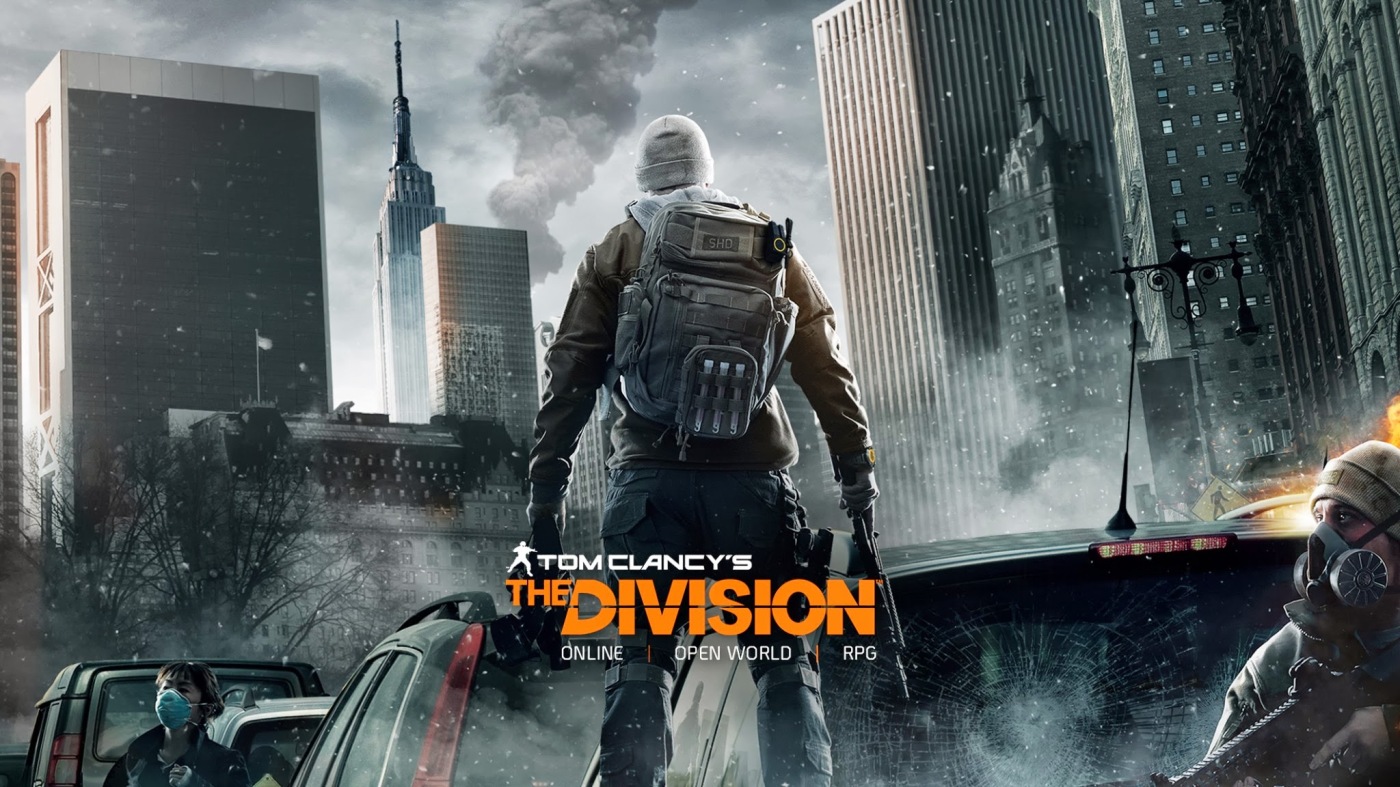 OK, so I’m a couple of weeks late to this particular party – which in Gaming terms might as well be years – but I’ve been wanting to play this game for sooooo long, and you are not taking this away from me, D’ya hear!? In fact, back when I was thinking about making the leap to Next-Gen, I distinctly remember that it was a brief little video of TCTD that sealed the decision, even though it was all still unclear quite when it would be released, or even quite what it would be. Two years, two PS4s, and a little bit of a Puppy-related delay later, I finally, finally got to play the damn thing. Obviously, that’s quite the build-up of expectations, so….did it meet them?

“Hell yeah!” is the short answer, and “Hells to the Fuck Yeah” would be the slightly longer one. Basically; yes, yes it did. And, perhaps even more impressively, it has done so even though this isn’t really the kind of game that’d usually float my boat – that I’d possibly even avoid. More on that later, but for now, let’s just go with the definite “Yes” stuff. 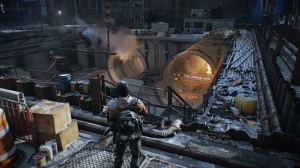 First up – and because it was the first thing that struck me about The Division – I’ma go all fanboy about the GRAPHICS of the game. I mean, Holy shitballs, The Division looks sublime. Despite Next-Gen having been around for two+ years, there haven’t been that many games that have taken my breath away in a ‘yeah, that’s some genuine Next-Gen shit right there….’ kind of way, but The Division is definitely one of them. And whilst that’s impressive anyway, it’s even more impressive because it’s actually set in a real place, and features humans – so, unlike a game set in an entirely imagined Universe, with Aliens or whatever, The Division is immediately going to be subjected to a degree of comparison and scrutiny – which for me, it survives admirably.

My first hour-or-so wandering around New York felt truly spectacular, and the post-apocalyptic detritus, the iconic architecture of NYC, and the snow lazily falling on both created some genuine goosebump-ey feelz. Feelz, y’alls – actual fucking feelz! Even my girlfriend – who’s apathetic (at best) about my “little games” – stopped what she was doing and watched mesmerised as I took my first tentative steps in the game. I mean, it’s not perfect – NPCs aren’t that great, for example – but there’s a distinct realism to NYC, a definite depth and sharpness to your surroundings, and that creates a real, palpable sense of atmosphere in the game, and with the possible exception of The Order, it’s probably the best graphical package I’ve come across on Next-Gen. 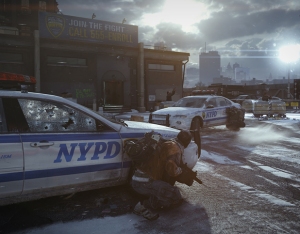 Next-up, I’ve also been suitably impressed by the MECHANICS of The Division. I’m not – by any stretch of the imagination – the best Gamer in the world, and I frequently have all different kinds of issues with cover and corners, but The Division’s approach to those things is a revelation to me. Sure, I’ve still been caught wafting my ass in the direction of a guy who’s shooting at me, but the instances of said wafting have been reduced almost exponentially – and being able to actually see, and plan your route from cover to cover (with a handy little line) is, quite frankly – a godsend. Likewise, when I’m not hiding like a coward, shooting stuff is smooth and reliable, and even though there’s no aiming assist, I’m not as rubbish as I often am in shooters, so I’ma call that a win for little old me. The exception to that is when you get rushed, or flanked and the camera freaks out a bit (like in the Uncharted games) – but I suspect that’ll get better as I get better (and more accustomed to the game).

Elsewhere, everything just feels smooth and crisp. Climbing, running, etc all feel polished, and realistic, and it’s commendable that all of that works in conjunction with the sense of realism the graphics and scenery have worked so hard to establish. Taken together, there’s a definite degree of ‘if you glanced at the game quickly, you could easily mistake it for a live-action movie’-ness to The Division, which isn’t an official Gaming description, admittedly, but hopefully you’ll get what I’m on about.

In terms of GAMEPLAY, I’m mostly loving what The Division’s offering. Sure, it’s not particularly groundbreaking, and you’re basically going to be doing the same kind of stuff you’ve done in countless other games, but that’s not necessarily a bad thing. There seems to have been all manner of comparisons made between TCTD and other games (mostly featuring a ‘crossed with’ somewhere), and I think there are definite hints of other games in there – although what they are will depend on your own experience. For me, there’s a distinct Destiny-ishness to the game in general (in lots of ways, but most obviously in the ‘communal’/online aspects of the game, the gear upgrading/loot-ey shenanigans, and the open-world nature of the respective Universes), but there are enough tweaks here to make it more compelling to me than I found Destiny. It’s obviously too early to tell if that’ll remain the case, but my gut feeling is that The Division will end up being what I wanted Destiny to be. 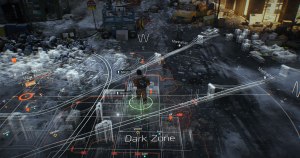 Which brings me to the ‘not my kind of game’ thing I mentioned at the outset. True story; when I realised that The Division was going to be one of these new-fangled online-ey Co-op dealios, I actually done a little cry, because I am – as a general rule – a solitary gamer. I’ll happily play multiplayer maps whenever I’m in the mood, so it’s not that I’m opposed to PvP, it’s just that in “campaigns”, I prefer being able to do everything on my own, in my own way. Admittedly, not having many friends has something to do with that, but I just have a weird, inbuilt thing about playing games with randoms – or even people I know. What if I’m shite, what if everybody dies because my clumsy sausage fingers press the wrong button, what if I accidentally do a hugely inappropriate ‘your momma’ joke to fill a particularly awkward silence? The struggle, as they say, is real!

Anyways, the good news is that, so far, I’ve not really had many problems pursuing a lone-wolf strategy in The Division, and more importantly, I haven’t been unceremoniously murdered for all my shit either, which, I’m not going to lie, has been a huge fucking relief. The AI I’ve been provided with to help on missions hasn’t been exceptional, but it’s been half-decent, and mostly better than struggling through on my own. Perhaps more importantly given the above, I’m actually quite intrigued about the idea of doing some missions with actual, real life people. Not just yet, but at some point – and that’s a pretty big step for me. I haven’t yet properly entered the Dark Zone either, so I haven’t really come across much of the “communal” aspect of TCTD – so I’ll hold off proper judgment until after that.

At this point, I’ve put about 10 hours into The Division, which means I’m still figuring stuff out, and will have a lot more stuff to figure out in the future but – so far – I’m enjoying it immensely. I’m still not entirely sure how all the gear, classes, perks, etc work together, but I’m actually having fun figuring it out on my own. That’s actually quite a big deal too, because that kind of stuff can often get me quite frustrated and have me screaming ‘What the actual fucking fuck is x, and what in Christ’s name does it have to do with y‘ at the TV, yet I sort of feel like it’s part of the allure of the game here – and ultimately worth figuring out.

And there is plenty to get to grips with, for sure, plenty to keep you occupied, and plenty of fun to be had in The Division. It’s a fairly interesting premise, it’s certainly easy on the eye, and – if early indications are anything to go by, it’s hugely compelling and addictive. Given the level of anticipation – and two years of waiting – there was every chance The Division would feel like a bit of an anticlimax, but that just hasn’t been the case at all. Like I said, it’s early days yet, but I’m cautiously optimistic that this could very well live up to expectations – and perhaps even cement itself as a true Next-Gen classic. In many ways, it’s what Next-Gen has been crying out for, finally making use of all the extra power and capabilities we shelled out our hard earned cash-money for, and it might even turn out to be a genuine Next-Gen console shifter.

Of course, only time will really tell, but as of right now, I’m willing to give it every second of gaming time I have. Certainly for the foreseeable future at least, and given that my Gaming time’s limited, and given my To-Play pile’s large and full of quality, that’s quite the achievement, all things considered! The Division is huge, hugely ambitious, and at the moment, it appears to be all I hoped it would be.